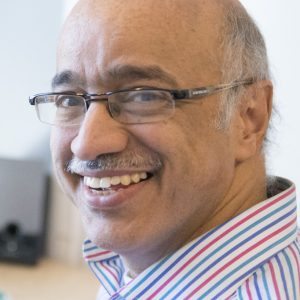 Abdul Kadir H. Mohammed is a Senior Professor of Biological Psychology at Linnaeus University, and associated at Department of Neurobiology, Care Sciences and Society, Karolinska Institutet, Stockholm, Sweden. He is a past Chair of African Regional Committee of International Brain Research Organization (IBRO) and served on IBRO Executive Board.

In this capacity he has co-organized IBRO courses is several African countries and was involved in co-organizing a Global Advocacy Meeting in Africa for Neuroscience research.

He has been an invited lecturer at a number of universities in Africa, Europe and USA including Princeton and Harvard Medical School. He has been a visiting Professor at Baylor College of Medicine, Texas Medical Center, where he was doing research on genetic dissection of learning and memory in drosophila. He is involved in the EU-funded Human Brain Project, in which he works in the Subproject “Ethics and Society”.

He did seminal work on the impact of environmental enrichment on brain and behaviour at adulthood and during aging at Karolinska Institute; and leads the SAGE (Successful Aging and Enrichment) project at Linnaeus University.

The SAGE project is on healthy aging and involves collaboration between Linnaeus University, Karolinska Institutet, Harvard Medical School and Medical University of South Carolina. Dr Mohammed has more than 100 scientific publications and has served on the Editorial Advisory Board of the Journal Behavioural Brain Research.

He has been a member of the Quality Board of EUROPLAT, a network of 32 European universities dedicated to enhancing learning and teaching of Psychology in Europe. The French Government awarded him the Palme Academiques medal in 2002, and Linnaeus University gave him an award for outstanding contribution of special importance for Linnaeus University in the world.

In 2012 he was elected a Fellow of the Linnean Society of London.